Drawing Straight With A Crooked Line 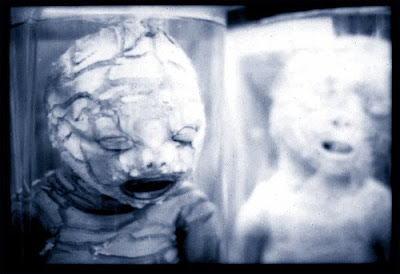 There's this adorable little saying thing that says 'I'm so clumsy I fall UP the stairs.' Lots of people like to think they're that cute, but to really be that is sort of crappy. The Sanctity of Life writer happens to know
someone herself that has fallen up a very tall flight of stairs in front of her peers. On more than one occasion. Looked like somebody chin checked her after it was all said and done.

To take that a step further, there are quite a few people on this planet
that, for all intents and purposes and especially with respect to the American cultural ideal of success, suck.

They're born with disfiguring diseases that make them the object of patronization or indirect, but polite..ridicule. Some of us have terrible credit, or are fat or just didn't get an MBA and don't know how to play the game. Perhaps you were a coke head and nobody cares that you got clean
and are trying your hardest, and are attempting to make good on the second
chance you know you probably don't deserve. Whatever the crack in the
perceived human perfection that these people have and this world demands of all of us, they're consumed by a struggle that most of us care little to notice.

The fundamental goal of Sanctity of Life is to hopefully get at least one person to stop and listen, for just a minute. Listen to hope, and
sing that song with at least one step of the many that they'll take on their
journey through forever. That one step has the potential to move mountains. Literally, pick up rocks and move them. This fact is repeated ad nauseum
in just about every post on this here blog joint. But it's important that you remember that as you read. Because, most of you are block heads and won't get it unless it's repeated 888888888888x :D
Just kidding.

Anyway and back to the point, our world is so full of broken folks. We all live on little islands and refuse to hear each other because ourselves > *. We believe we're the problem, because false humility is cool. And then, we resolve the problem with a solution that we call 'self.' Then we're even bigger heroes! yessssssssssssss!
:sadface:
no.
Commitments are commitments are commitments. If you've fallen, or thought of not keeping them, but still kept them then really, that's all that mattered. If you've messed up but plod along every day and do the right thing and don't really ask for attention more than likely, because of shame, that's o.k.too You're still moving.

God makes straight lines out of crooked messes. Bottom line, that's it. When the intent of the heart moves you to a place that keeps you on the path that you know is the one you need to be on, who cares if you mess up. You're doing it, and I'm so proud of you. I sound like Mr. Rogers but, true story, you're beautiful. Not kidding.

Keep going and hold on. Somebody hears you. Your future is not predicated upon your past, under any circumstances. Ever. So what if you're weird. Lots of us are, it's just too scary to admit it. Lots of us have been the suck, and perhaps still are. And, you know what..? Heroism is the ability to undergo attack, walk in fear, move in increments so small that they're indetectable to the human eye, and not fall apart. Every single moment that you're moving forward is another victory over the big black hole that says that your ability to afford 33333333333 dollar purses the size of a sock and drive an Escalade are what define success.

I'm so proud of you. I mean that with every single cell in my body. It sounds so trite to see that spelled out in some font on a worthless blog on the internets. But you'd see my love for your triumph a mile away if you met me. Whoever you are, where ever you're at, you're still here aren't you? Maybe it's dark as you read this. You got your lil cigarette, and it's getting cold outside. Christmas is coming, and nobody can see the little light inside of you that you're trying so hard to keep from going out. But I do. And you = precious. Perfection is what you find in imperfection, and true beauty and the stuff that comprises the sum total of good will never be found in anything palatable to most of today's culture. You're o.k., and you're not alone, and you are so precious that I had absolutely no idea how to articulate it. Also, the Sanctity of Life writer's dog keeps attempting to eat pencils and she's terrified that the dog's upper digestive tract is going to perforate as a result, and she doesn't concentrate so well so this particular entry is sort of crappy. But I mean well and, honestly, I had a conversation today with someone who's heart touched me so profoundly. She's going to be a nurse. And to go from where she was to where she is, blessed my heart so much that I needed to remind whoever reads this that is probably just as cool as she is that,

you are more precious than you will ever begin to comprehend. All this person had to do was be herself, and explain who she is in her own words and she shined brighter than the brightest star, ever. Don't waste your worth chasing things that you'll never catch. No matter what your weakness or thorn or set back or bad thing or past or shame is, you're amazing.

To read more about that horrendous picture above,
click here