It's Still a Flower 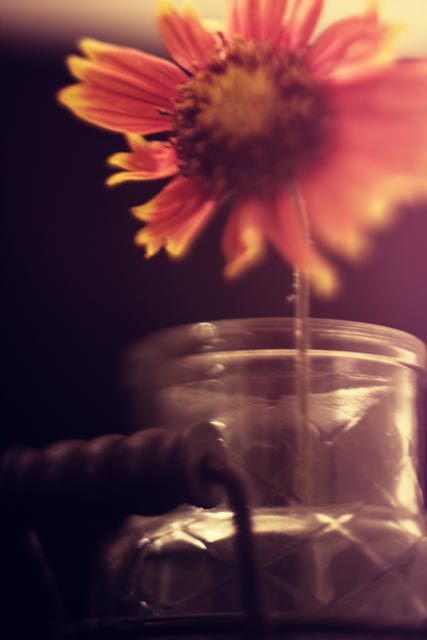 I started running again um..like..2 days ago. This means that I get to the curb in front of my apartment and high five myself - which looks like I'm clapping one time, very deliberately - thereby causing people to wonder what the hell is wrong with me - because I made it 12 feet without dying of being an out of shape fat person.

So it's Spring time in Texas which is my favorite thing ever. Please bear in mind also that everything that I like is my favorite thing. But this favorite thing is cool because I love science-y stuff. I like to see Jesus everywhere. It's neat to find Him in every place you go. But in the SPRING TIME IN TEXAS!  He's extra awesome because everywhere I look in the flowers and the rain and the wind and growing things and new baby animals and different kind of sunshine... He's in all of that stuff. IT'S SO COOOOOL!

So, running + SPRING TIME IN TEXAS!  + my extra big feet = oh man. :( So I'm frolicking along this evening and there's a storm in the sky. It's windy and not cold but not warm and cloudy and damp. And flowers. Everywhere I looked there were flowers. So I'm doing my best to keep a decent pace but ...the FLOWERS ARE EVERYWHERE! I had no choice but to stop a time or 9 and kneel down in the wet grass and look at them.

The symmetry of their shapes is brilliant to me. Their colors always match. And they do this neat thing that important scientist people call a  "phototropism". They grow directly toward the sunshine. They find it, and bend and move however they have to in order to get as close to the sun as they can. So every few minutes I couldn't help but stop and get down in the grass to look at them and I'm sort of schizophrenic-ish saying out loud to I'm not sure who, "WILL YOU LOOK AT THIS?!!!!". Thankfully I'm not so psychologically dysfunctional that I forgot my original intent and was able to re-direct my undisciplined self back to the task at hand. And I finished what I intended to do. But not before I grabbed 17 handfuls of various flower guys to take back home to photograph.

I came home sweaty and gross with the equally sweaty and gross SoL child who accompanied me at a safe distance as she's had 14 years to learn that her mother + running = imminent catastrophe. (Like that one time I was picking stalls and decided to take a break to run back home for a snack and somehow crucified myself through my boot on the only board with a nail sticking out of it in a 23 acre radius.) Enjoyed some mama teenager child time and then proceeded to take some pictures. I don't have good light in my apartment. Nor do I have important photography people stuff for optimal light shadows artistic settings blah blah professional things. So I set all my pretty flowers down. There were this kind and that other kind. Purple and yellow and orange and pink. But there was one that was particularly wonderful to me.

The problem with Mr. Wonderul is that some jerk ate a bunch of his petals. Probably some sort of beetle thing. Everybody knows they're awful. (Don't judge me. Just because I love science doesn't mean I love bugs.) So he was broken and off center. He was sort of ugly colors and to be honest he kinda looked like what would happen if you microwaved a yellow crayon and an orange crayon together. On your mom's really pretty silver plated china. Which I did one time and came very close to exploding the microwave so that's how I'm an expert on describing messed up flowers.

So let's see! So far we have...
1. A mama lady with inordinately large feet and her spawn running around outside during a thunderstorm somewhere in Texas.
2. Said mama lady stealing large handfuls of weeds while her embarrassed teenager child does her best to pretend she has no idea who the large foot-ed woman with the weed fetish is sitting in the grass in front of her.
3. Aforementioned mama lady excitedly transports large handfuls of above referenced weeds to her bathroom with the goal of photographing their beauty.
4. Subject lady then chooses the ugliest weed flower of all of the weed flowers and decides that THIS IS THE ONE!

So I sat in the floor in front of my toilet with my hair in a towel after my shower and proceeded to take the lens off of my camera and hold it in front of my camera body at different angles. Instead of just adjusting the focus and blahblah professional people behavior, I just took the whole damn lens off. And I sat there for about an hour and took pictures of that ugly ass weed flower thing until I realized that my ankles were stuck to the bathtub behind me and I may or may not have fractured a something or other in one or both of my feet.  I did what I did, and I was so intent on trying to find a way to show how neat this thing was in spite of it's problems that I didn't realize that my ankles were asleep. Or that ankles were even capable of falling asleep.

When I finally felt like I'd accomplished something, I started wondering...Why did I do that? It was broken. And un-pretty. When I picked it it was really wrinkled and had weed leaves instead of delicate flowery-type-leaf-appendages. There were parts of the middle part that were missing. Of all of the awesome flowers I found, this one really just wasn't a cool one to take pictures of. Much less 174 pictures.

So here I am with fourbillionsevensixthreethree blurry, bad light, out of focus pictures of a broken weed flower. When I sat back and looked at what I'd done I realized that this was 1 hour of my life I would never get back. And I don't even know what the hell I did. BUT THEN I FIGURED IT OUT!!!!!!!!

If I look at it through bad light and a wrong lens, is what I see through the negative obstacles I intentionally created an accurate representation of the ugly weed flower guy thing? Kind of. The ugly weed flower guy thing...does his ugly weediness have any bearing on the reality of his measurable substance? That is - does he still produce pollen and propagate himself the way other plant guys do? Or is the truth of what he is maligned because he's kinda wrinkled and missing some stuff?

What about my feet? They're a size 12 - just so you're aware that I'm not being self deprecating. I told you.  They really are freakishly big. The bitterly ironic even worst part of it all? Is that as huge as they are, they are equally as skinny. THE ONLY PART OF ME THAT DOESN'T NEED TO LOSE WEIGHT. WHY?!

So... Am I still a chick because I'm kind of fat and couldn't be petite even if I lost 700 lbs? Am I still beautiful like the rest of the people God made who don't have stupid teeth and unrefined features and are built like line backers? Line backers with fat arms? I'm still a mama. I'm still a nurse. I still do good stuff. Because a broken flower is still a flower. A broken person is still a person. And what do persons do? They light up lives.. Just because they're alive. They do good stuff sometimes, and other times they don't at all. But they're still tenderly, intentionally and lovingly created in the palm of the hand of God Himself. That's you. I'm talking about YOU.  And YOU were the point of this long, stupid thing.

I've struggled for as long as I can remember with wondering why I couldn't be little and white and cute and every other thing that; through the distorted lens of my sadly incorrect understanding of what beauty really is, I'd decided was what my worth should be measured against. I know lots of people hurt the same way I do with wishing they could be what the rest of the world says is beautiful. And it hurts me so desperately to look at someone and know that they live with that kind of hurt. Because you're wonderful. I need to lose some more pounds. It shows that I value myself when I take steps to proactively protect my health. This is a good thing. But whether or not I choose to take care of myself, I (and you too) have to find a way to understand that I'm still a person. And people have intrinsic, precious, incalculable worth and beauty that just does not go away. Ever and has nothing to do with whether or not they've arrived at the place of wisdom that will motivate them to care for themselves they way should as beings deserving of healthy attention and concern.

You're just so beautiful. It's frustrating that I don't have a better way to convey such a kick ass truth. I wish I had something more interesting or profound or clever to tell you this time around. I'm sorry that I do not.  But I'm positive that if you saw that flower and had a 1+1=2 thing happen in your head when you were able to see what I just tried to tell you about, you'd like your own feet a lot more after having the privilege of eyes to see what's good and certain. Because I do. o.k. that's a lie I don't. I still don't like my feet. But I don't feel nearly as man-like and funny looking as I did before I took that picture. So there's that. You're so precious and you always were, always will be. And nothing can change or reduce or make that not true. Hold on to that. Please.