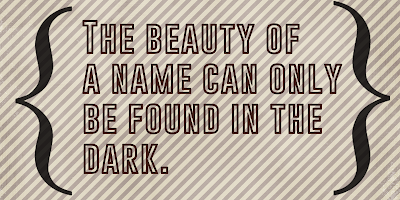 Tonight I was watching some random crime show. About a random crime thing. So there was a kid who had committed his first murder when he was 12. Him and his friend were described as "street kids". Street kids you say? What exactly does that mean? How did these children get to the street? Who put them there? Why did they stay there? Did anyone wonder where they were? SOMEONE had to give these children names. It made me wonder - looking at their broken, sad faces. With their empty eyes. Flat affects and filthy and scars carved into their cheeks where no child should be marked like so. It made me picture them as brand new babies. William and Vincent. Those were their names. Respectable sounding. I tried to picture each child's mother. The "street kids." I tried to see their mama's faces. Were their daddies there when they were born? I tried so hard to place myself in that moment that they came out and in to this world... I thought of their mamas looking at them and whispering their names for the very first time. What kind of wonder a mother must have felt looking at those new little people. Were they even conscious to see their baby boys open their eyes for the first time? Did their hearts stop when they saw themselves in those faces? Someone gave those children names. Someone said those names for the very first time. Be it a crack addicted mother, or maybe one with psychiatric illness. Someone full of the mystery of the love of a brand new parent. Their names came from somewhere. They mattered. At some point, they mattered even for the most brief moment - to someone else. When I meet people it's an autonomic function of my brain to do with every person what I described with the "street children" above. I can't stay mad at anyone for too long when I do that. Now you try it. Even if you don't try it with others, try it with yourself.